This game is for younger children. Your child works on reading words in a phrase and following short directions.

Five to ten small plastic or stuffed toys are used. You also need a place in which to move the toys around. A Barbie house, toy castle, plastic farm are some examples (a box will also work). Sentences are written on strips of paper that direct the child where to move the toy. For example, “Bear is in house,” “Bird is on roof,” “Cow is on the box.”

Sentences are selected one at a time. Your child follows the directions and moves the toy. The directions should be easy to understand. The following words are effective in short sentences: on, over, under, in, behind, on top, with, next to. This game is effective for teaching sight words and improving comprehension.

You could also do this activity with markers and paper. Directions could be, “Set doll on paper. Draw a line under the doll.” Variations on this would be to write the word “doll” over the doll (or under it, next to it, etc.).

Spread words about a foot apart on the floor, facing the same way.

Instructions: When I call out a word, say it after me. Then throw your beanbag to the word. The word is [say word]. Child tosses the beanbag or stuffed animal to it. (Next step is optional). Bring [word] here and we’ll practice it. Practice with one of the techniques below:

The phonics phone can be used during part of the practice time. Words are collected and reviewed at the end of the game.

This is a variation on the activity described above. Decorate the box with stickers or use a photo of a favorite sports figure or movie star. Someone running or jumping or involved in an activity is good. What does your child like?

Prepare the photo by gluing it to a folder or a shoe box. Make a cut big enough to allow a strip of paper to be pulled through the cardboard. Write the words to be studied on a paper strip with a little space between words. When the strip is pulled through, only one word should be revealed at a time.

Incorporating pictures and decorations into games is very simple—and the payoff can be huge. Try it! 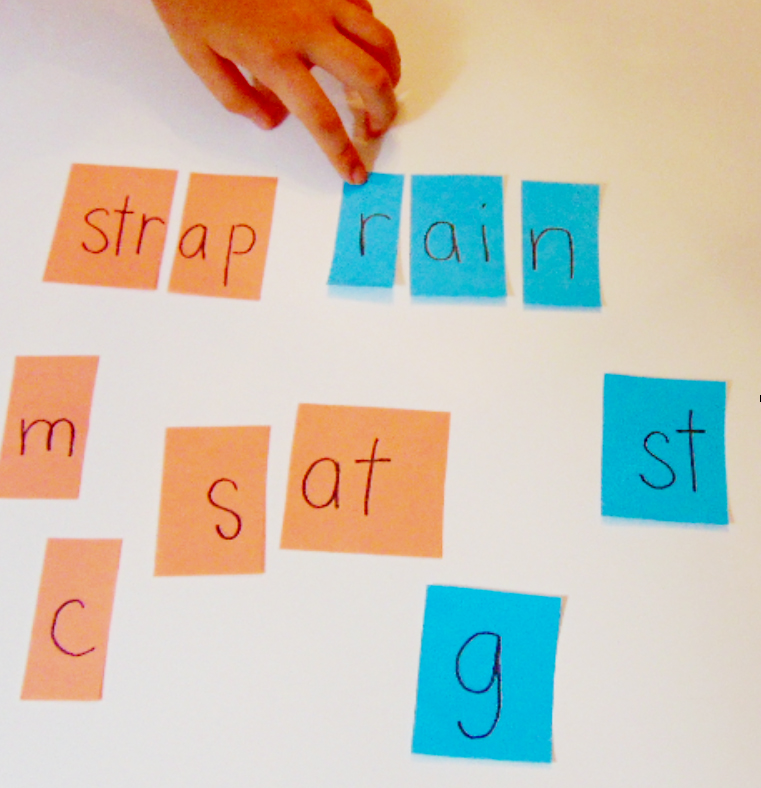 Write the words on colored paper or cards and cut them apart. When words are cut apart, phonemes are kept together. A phoneme is a sound, such as /ā/ in rain. Example: In rain the three phonemes are written: r, ai, and n. Other patterns, such as consonant blends can also be kept together The papers are set out on the table so they appear out of order. You say the word and your child puts the pieces back together to form the word rain.

Once your child understands the activity, more words can be added. Be sure to begin with easy words that follow the rules of phonics. Choose words from the reader and from related word lists in Appendix 2 or Explode the Code workbooks and add them to the game.

Start now with Reading by Design